In the main text, I presented a simple formula. However, if I try to more precisely fit a formula, the regression spits out the following:

The complicated formula does a bit better, but it has a theoretical downside. If the Dylos 1-micron count is 0, the formula will spit out -5.309 microns. Of course that’s impossible! Negative counts should not exist. The simplified formula does not have this drawback.

Of course, it’s not ideal to create a formula based on a dataset and then judge it against that same dataset. Ideally, we’d gather more data and test this formula on later data.

I’m particularly interested in testing during different seasons because humidity may also play a role in the conversion. The composition of particles may change across different seasons. As an extreme example, Beijing has a larger percentage of large particles in the spring when the seasonal sandstorms hit. Other cities may also have seasonal differences, even if they’re less obvious. 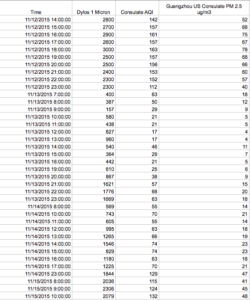 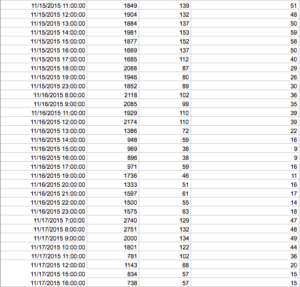