Can activated carbon remove formaldehyde? In earlier tests, Smart Air found that carbon can reduce VOCs from cigarette smoke. But formaldehyde is a particular concern for many people, so we put it to the test by ordering formaldehyde straight from the factory and testing it against carbon filters.

Formaldehyde is a big deal in China. I’ve found most of my Chinese friends know the word “formaldehyde.” But this is not because Chinese people are all science nerds. At dinner with Chinese colleagues, my friend David once used the word “carbohydrate” (碳水化合物), His friends instantly made fun of him for using a “science word” in casual conversation. Why the double standard? Because in China, just like carbs in America, formaldehyde is an everyday health concern.

Why are they so concerned? Formaldehyde is a volatile organic compound (VOC) that causes scary health problems like ulcers and cancer. Yet it’s common in construction materials and new furniture. The people who should worry the most are people in new or recently renovated homes. Tests of new and renovated homes routinely find high levels of formaldehyde.

Why formaldehyde is so hard to remove

Formaldehyde is a tricky problem because – just like all VOCs – it escapes from materials as a gas. That’s tricky because the most common filters are HEPA filters, but they aren’t made to capture gases. I’ve heard companies claim that activated carbon can remove formaldehyde, but I’ve also seen companies selling sprays that claim to clear formaldehyde from your home. That sounds a lot like snake oil to me.

Since there’s a profit motivation for companies to claim they can get rid of formaldehyde, I wanted to empirically test whether carbon actually works.

Thus, to be absolutely sure we were detecting formaldehyde, Smart Air co-founder Anna bought bottles of liquid formaldehyde. We’re risking our health for science!

To spread it in the room, we put it in a rice cooker along with 250 ml of water. When the rice cooker heats up, it releases formaldehyde as a gas into the air.We ran the cooker in a 4.14m2 porch (volume 10.35m3).

The Industrial Scientific MX6 detects different types of VOCs, not formaldehyde specifically. But because we released formaldehyde in the room, we can be sure that that VOC is formaldehyde.

To attack the formaldehyde, Anna put a composite activated carbon filter on the Cannon.

Great, it looks like carbon can remove formaldehyde! But we need to be sure that’s the effect of the carbon, not just the formaldehyde dispersing over time. To do that, we need to compare those results to the fan-only condition. Here’s what the two tests look like side by side:

Does everyone need carbon?

Studies have found that formaldehyde is much more common in new and recently remodeled homes. That means people in new or remodeled homes probably need carbon. However, my Ibrid MX6 detector found zero VOCs in ALL apartments I tested, except for places that had recent renovation or smoking,

Do I still need a HEPA?

Similar to my earlier VOC tests, one limitation is that the formaldehyde here was not naturally occurring. It would be ideal to find a house that was recently remodeled and already has formaldehyde in it. That setup would more closely approximate how most people face formaldehyde.

Thomas is an Associate Professor of Behavior Science at the University of Chicago Booth School of Business and the founder of Smart Air, a social enterprise to help people in China breathe clean air without shelling out thousands of dollars for expensive purifiers.

Can Plants Filter Out Formaldehyde & Benzene VOCs From The Air?

What is your suggestion for a filter system to put in our new manufactured home that warns of formaldehyde?

Measuring formaldehyde is not easy. See this article we wrote on how you can detect formaldehyde in your home. Short answer: your nose does a very good job of detecting it, and may well be more reliable than other devices out there.

My son makes large quantities of slime in our enclosed garage. I am concerned about the fumes from glue, fragrances and borax that he uses in bulk. My question is would the carbon filter be a solution at would you be able to recommend a purifier for our situation. Thank you.

Love your site and the work you’ve done.
But –
1. Carbon is inefficient at removing formaldehyde compared to other VOCs.
2. Most PID meters that use a 10.6ev blub will not register formaldehyde effectively. The energy needed to knock off an electron of formaldehyde is higher
3. The PID meter you are using is rather low resolution at 100ppb. You would be much better off with a meter with 1ppb resolution. See the ppbRAE3000. That’s what I use in testing.

Hi Randy, Paddy here from our Beijing lab. Great points on carbon and the MX iBrid6. Carbon filters are not a perfect solution like you say, since there are many types of VOCs and it’s difficult to have a ‘one filter suits all’ kind of situation. That’s why the best way is still to solve the problem at its source, or to increase ventilation in your apartment (for example by opening the windows when PM2.5 levels are low). I’d not heard of the ppbRAE3000 before, but it looks like an expensive piece of kit! If you have any data comparing… Read more »

That’s exactly right Prad. Carbon filters don’t actually break down the VOCs, just capture them. That’s why replacing carbon filters regularly and keeping an eye on when they are saturated is important. The concept of off-gasing can also be used to increase the useful life of the filter, by allowing the filter to off-gas in an outdoor environment. However, it’s difficult to have an accurate idea of how much this impacts the useful life and is therefore not recommended.

Does the activated carbon filter get attached first or after the hepa filter? Your site is hard to navigate and find the information about the products and how to use them. I’ve been using the Cannon for 4 years w/ the hepa filters. Just got some charcoal ones to add… wish it was easier to find things .. Thanks!

Hey Noah, Paddy here in Beijing. You’re right it’s pretty hard to navigate the website, we’re working on trying to streamline everything, but these things take a while. To answer your question: we generally suggest putting the carbon filter on the outside, as that ensures a better seal between the fan and the HEPA filter (the pre-filter acts as a good seal!). Here’s an image explaining it, but I’ve also added it to the cannon page. Thanks for your suggestion! 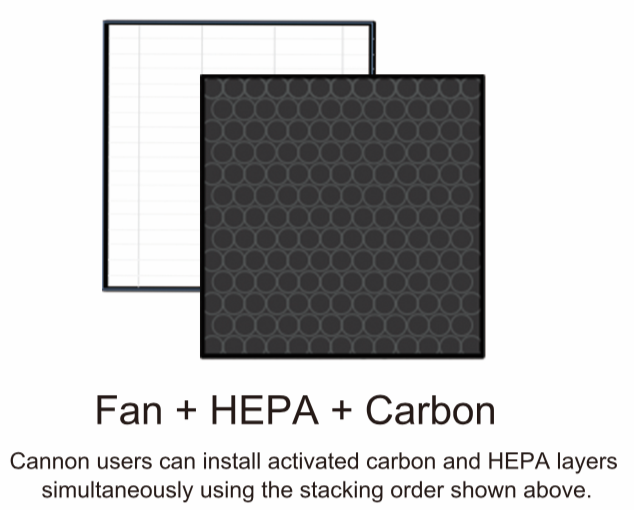