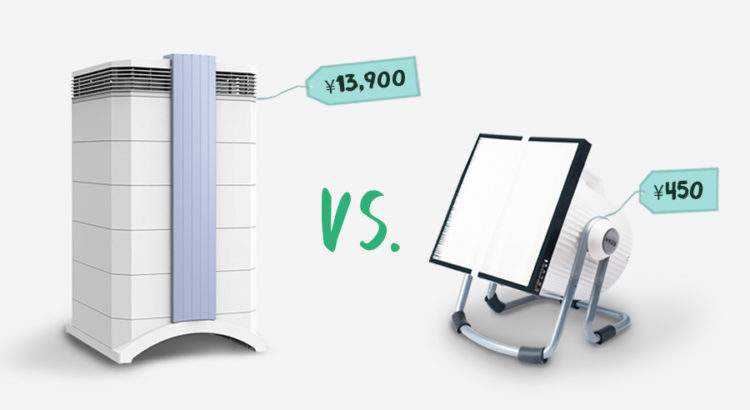 When the “airpocalypse” struck Beijing, I got out my credit card to give $1,000 to IQ Air. But the price just didn’t seem right. I soon learned that HEPA filters are what capture particulates (even in the expensive machines), and they were invented way back in the 1940s. So I made my own and started doing tests.

Could a fan and a HEPA remove as much particulate as an IQ Air? The IQ Air is one of the most expensive purifiers on the market, and it advertises “the cleanest air guaranteed.” On top of that, it uses more than twice as much energy as the DIY Cannon, so surely it can capture more particles?

I tested all of the purifiers in the same 15m2 bedroom in Beijing, with the same particle counter, for the same amount of time (overnight). To calculate effectiveness, I compared the number of .5 micron and 2.5 micron particles before turning on the purifier (baseline) to the average of the last four hours before I woke up. (More methodological details here.)

I was particularly surprised because the IQ Air was noticeably louder than the Cannon:

With this new data, we can use my earlier tests in the same room to compare the DIY to the three major brands:

All of the filters significantly reduced particulates, but the 470 RMB Cannon removed as many particles as the highest-performing big brand. Even the 200 RMB Original DIY was 6% behind the Blue Air on the .5 micron particles and 4% behind on the 2.5 micron particles.

Among the different brands, there seems to be no relationship between price and particulate removal. The cheapest name-brand purifier was the Philips, and it removed the most particulates:

That’s exactly what we found in my mask fit tests and Dr. Saint Cyr’s fit tests:

According to his data, 6 RMB 3M masks like the kind I use now outperform the 349 RMB Respro masks I used to use. With the 3M 9501, I can buy 58 masks for the price of one Respro AND block a higher percentage of particles:

Bottom line: clean air doesn’t have to cost an arm and a leg, whether it’s in your home or strapped to your face.

As always, I’m posting the raw data and more details on the testing methods below for fellow nerds. And in a follow-up post, I’ll talk about the other important ways to compare purifiers: HEPA replacement costs, gas removal, and extra features.

I calculated effectiveness as the percentage of particles the purifier removed from the room air. The baseline was the particle count before turning on the purifier. The final count was the average number of particles over the last four hours before I woke up. I prefer this over comparisons to outside air because:

For more details on the methods, see the end of my earlier post. All methods were identical to my earlier tests.

Of the 11 tests, one day was a strong outlier. On May 22nd, the IQ Air got only 68% of the .5 micron particles. Normally when I see poor results, it’s because the outdoor air got a lot dirtier during the night. But on May 22nd, the outdoor concentration fluctuated between 74 and 110 micrograms, which isn’t out of the ordinary.

Because I couldn’t see any reason the results were poor that night, I left the data in. If I redo the analysis with that day included, the results are only slightly better: 93.0% of .5 micron particles and 96.5% of the 2.5 micron particles. That would put the IQ Air about equal with the Philips and still 4% below the Cannon.