Results were identical to my earlier tests of the Original DIY, Blue Air, IQ Air, Xiaomi, and Philips. Anna conducted the overnight tests in her 15m2 Beijing bedroom. Doors and windows were closed during the test (except for occasional opening during the first couple hours before bed—that random variation is one reason I use the average of the last four hours to calculate effectiveness).

Anna used the Dylos Pro DC1700 to take a baseline measurement of the particulate in her room before turning on the purifier. She then turned the purifier on and left it on all night. The Dylos takes measurements every hour in hourly mode. I calculated effectiveness as (baseline particulate) – (the average of the last four hours before waking up).

It’s more convenient for Anna to run tests during the day, so she first ran 8 daytime tests. When I discovered this, I asked her to run nighttime tests instead because all of our previous tests were nighttime tests, and I didn’t want to unnecessarily change a variable. So Anna then ran 11 nighttime tests.

So to detect small differences, I put more weight on the CADR tests. And for that reason, I tried extra hard in this data set to isolate days with stable outdoor PM2.5.

First, I pulled out all of the test days where outdoor PM2.5 fluctuated no more than 50 micro-grams during the test. That left 6 tests with an average outdoor PM2.5 of 90 micro-grams, which is right near Beijing’s average for the last few years. I report this result in the main article: 86% and 94%.

Another way to do this is to pull out the day with the most stable outdoor PM2.5. The data from January 16th stick out for being remarkably stable, with an average of 122 micro-grams. The results from that day are almost identical to the average in the main article: 86% and 95%.

But wait, it’s not a fair comparison if I’m pulling out the very stable days for the DIY 1.1 and not the DIY 1.0. Indeed! I did the same analysis in my most recently published tests of the DIY 1.0 (tests of the slightly smaller 29mm HEPA). In that dataset, the results on the 8 stable days where outdoor PM2.5 fluctuated no more than 50 micrograms was 84% and 91%. That’s nearly identical to the 84% and 92% values for the DIY 1.0 here. Thus, I’m moderately confident that the room tests are picking up on a difference in effectiveness between the 1.0 and the 1.1 (although I give the final say to the CADR tests).

But Wait, Don’t We Need a Control Condition?

How do we know particulate decreased because of the purifier? Maybe it’s because Anna was breathing in all that particulate. Maybe particulate goes down just because the doors and windows were closed. Maybe outdoor particulate went down during the test.

These are fantastic sources of skepticism. To test for these alternatives, I’ve run tests using a nearby control room, which rules out some of those alternative explanations. Some people suspect that PM2.5 is naturally lower at night (that’s what I always thought), but PM2.5 data in Beijing and other cities shows that the opposite is true. PM2.5 is on average higher at night. That means running overnight tests actually makes it harder to show an effect (on average). But the better way to answer that question is to look at data from shorter tests and tests with the control room rule out the idea that these reductions are because of changes in outdoor air pollution.

Finally, are humans good purifiers? I’ve analyzed particulate data from rooms with and without humans to test this question. The results are abysmal. I don’t recommend buying a human purifier.

As I’ve argued before, it’s important to analyze the average outdoor PM2.5 during the tests. That’s because EVERY purifier I’ve tested achieves lower percentage reductions on days with high outdoor pollution. It’s harder to fight particulate when there is really thick particulate seeping into the room.

The attached ZIP file below is the original data for the DIY 1.1 tests for different days, including the outdoor PM2.5 levels as recorded by the US Embassy. My comparison data for the Blue Air, Philips, IQ Air, and DIY Cannon are available through in my earlier post. To request a copy of the original data in Excel format, send an email to [email protected]. 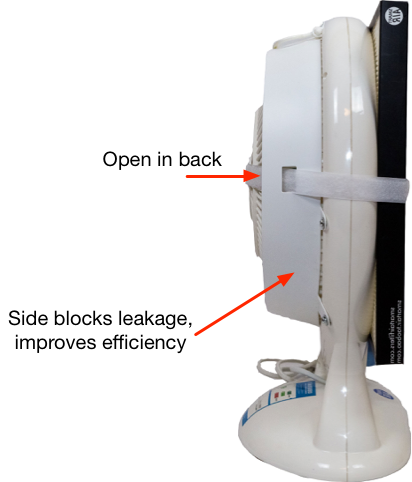