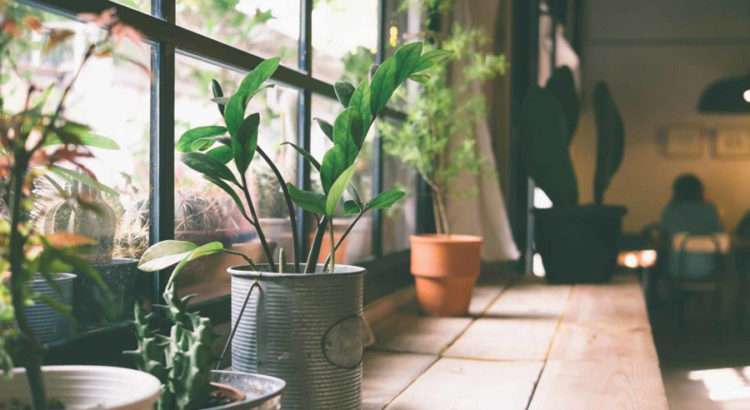 Can plants be useful substitutes for air purifiers? Data shows that plants aren’t great at removing VOCs from the air. Despite a NASA study showing that some plants like ivy, spider plants, aloe vera and bamboo palm could reduce VOC levels, real-home data shows otherwise.

But how well can plants filter out particles from the air? Particles differ from gases in that they’re much bigger, and they behave in a different way. Particles, or particulate pollution, includes things like dust, PM2.5, pollen and allergens?

The Test – Can Plants Remove PM2.5 and Other Particulate from the Air?

To get to the bottom of whether plants can filter and remove PM2.5 particles from the air, I put an army of plants into the Smart Air Beijing office. The plants used included spider plant and aloe plant, some of those referred to in the NASA plant study. I tracked particulate levels over 8 tests: 4 tests with plants in the room and 4 tests without plants.

Each test was run for 30 minutes in the Smart Air office, which measured 20sqm in size. Here’s what I found:

Comparing plants to a DIY purifier, here’s how well they performed at filtering out PM2.5:

These plants had no detectable effect on particulate pollution indoors. If anything, the PM2.5 levels actually increased during the tests with the plants.

OK, this data shows plants have no detectable ability to purify air in our home. But these tests were done over just a 30 minute period. Can plants do better over a longer period of time? There’s an even easier way to answer this question.

Can Plants Remove PM2.5 from the air over a Long Period of Time?

But here’s an even simpler way of asking this question. I have hundreds of days of data on PM2.5 air ants. This can answer a slightly different question: in a home with lots of plants, are particulate levels safe?

This can at least test a strong version of the plant hypothesis. If people are correctly using plants to get clean air in their home, the particulate levels in my apartment should be low.

The Data – Can Plants Filter PM2.5 Long-Term In a Bedroom

The bedroom of my Beijing apartment is 15m2, and there are two large spider plants, an asparagus fern and other plants.

I collected data before turning on any purifiers when I got home in the evening, usually around 8-11pm. Windows were always closed.

That’s a lot of particulate! But how does that compare to “safe?” The World Health Organization’s annual limit is 10 micrograms per cubic meter, which is roughly equivalent to 1,000 of 0.5 micron particles on the Dylos. Studies have found health damage even below 10 micrograms, but it’s at least a good start.

If we superimpose that limit on my room data, we can see that almost all of the datapoints are above the limit:

So at the very least, I am confident to tell people living in China: even if you have multiple plants in your room, the particulate levels are most likely unsafe.

Bottom Line on Using Plants as air Purifiers for PM2.5 in Your Home

Bottom Line: Data shows that plants have no detectable effect on PM2.5 in your home or office. While plants may look great, and can do wonders for brightening up your room, they are unlikely to serve as effective air purifiers.

This test is a good start, but it leaves open several questions:

1. Do plants have some small effect on particulates?

It’s possible that the plants in my room are removing some amount of particles, but that small effect is being overwhelmed by the dirty air seeping in from outside.

2. Is there some special type of plant that removes lots of particles?

3. What would this look like in the US, where outdoor particulate levels are a lot lower?

How Long Does It Take for Formaldehyde &Amp VOCs to Off-Gas From Your Home?