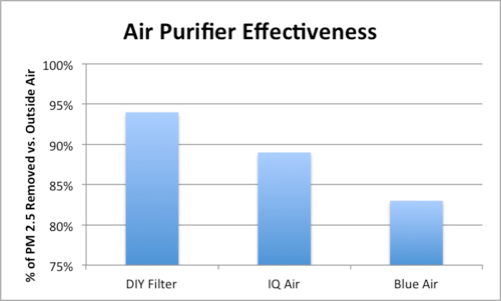 In earlier posts (1, 2), I showed that you can make effective an DIY filter to clean air pollution out of your home. But just because it is effective doesn’t mean it’s as effective as the Ferrari filters. How effective is the DIY filter compared to the expensive filters?

I’ll attempt to answer this question from several angles in different posts.

Here’s one method: comparisons with the published data from the blog of the Beijing doctor Dr. Saint Cyr (which was an original inspiration for me that air purifiers could actually reduce air pollution). He ran tests of an 11,000 RMB IQ Air and a 6,000 RMB Blue Air. I used the same calculation of effectiveness and compared his results for the pricey machines with tests of my DIY filter. Here are the results: To make the comparisons more precise, I compared my filter results only to the tests he reports from the IQ Air and Blue Air on max power in his smaller room.

Dr. Saint Cyr calculated reductions based on outside air quality, which I do not think is the best method. I think it makes more sense to calculate reductions based on the room air before and after using the filter because my room air is significantly cleaner than outside air, even before using the filter. But to make the data comparable, I calculated effectiveness using Dr. Saint Cyr’s method.

Now, the comparisons aren’t perfect. Dr. Saint Cyr’s smaller room is still 6.5 meters larger than mine. He also doesn’t say how long he ran his filters and whether the doors were closed. My tests were with the doors closed and overnight, so the filter had several hours to run.

(Update: via email Dr. Saint Cyr said his tests were with doors closed and testing times of 1 hour+.)

But even if the difference in room size bumps mine down 5% and the others up 5%, that would mean 11,000 RMB and 166 RMB get you similar results. To illustrate that, I calculated a graph of how much you’re paying for each percentage reduction in air pollution: Of course, the ideal test would use all three filters in the same room with the same particle counter. To that end, I will hopefully get the chance to borrow a friend’s Panasonic filter and test it in my home. I’ll post those results when I get them.

Conclusion: A DIY Filter can be as effective

Although the comparisons are imperfect, they show that a DIY filter is at least roughly comparable to expensive filters at a far lower cost. This illustrates my larger point: all you really need to combat particulate air pollution is a HEPA filter. In fact, Dr. Saint Cyr found the same thing in his tests of a much simpler Hunter brand HEPA filter. In a room with the doors closed, his HEPA got 91% of the pollution–similar to what I found.

For data nerds like me, I’m posting more details on my data and methods here:

For Dr. Saint Cyr’s data, I used only the data from his smaller room (the bedroom) for the Blue Air and IQ Air on max power. I chose the max power only because I run my filter on its highest setting (3 out of 3).

The data are from hourly PM 2.5 measurements of my particle counter at the start in the evening to when I wake up in the morning. All tests were in my bedroom with the door and windows closed (size 13.5 meters squared). To make my measurements comparable with Dr. Saint Cyr, I calculated percent reduction from outside air.

For outside AQI, I used the US Embassy Twitter feed at the time my test started and converted it into a count on my particle counter. This is a bit complicated because my counter gives the number of particles, and the US Embassy estimates the weight of those particles. To calculate between the two, I’ve taken 36 measurements with my particle counter outside and compared them to US Embassy concentrations. Overall, they correlate at r = .90, which is about as good as you could expect given that their site is in the northeast part of town, and I’m in Dongcheng, near the Drum Tower.

Here’s a graph comparing US Embassy PM 2.5 concentrations with measurements of outside air from my particle counter: (Update: Newer tests comparing my particle counter to the US embassy machine here.) 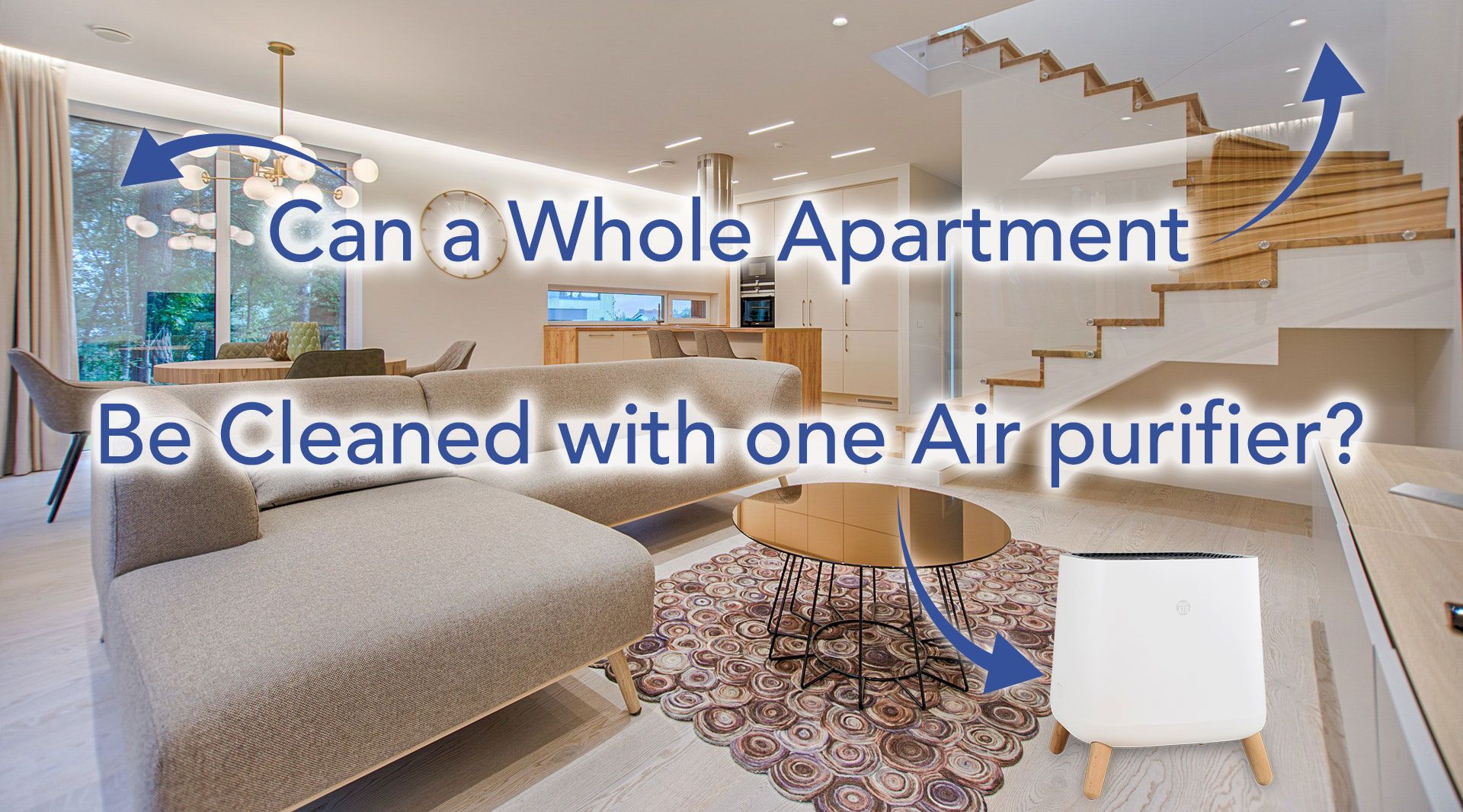