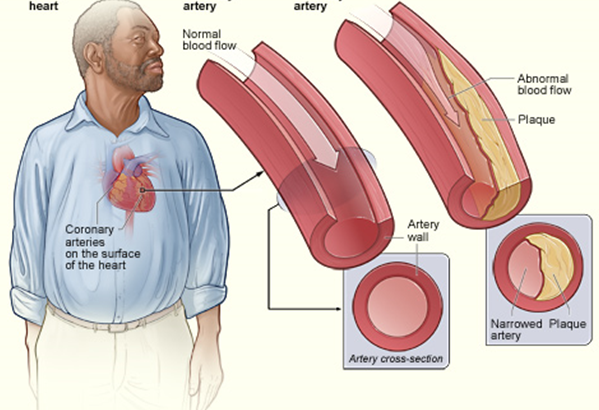 For years, air pollution has been linked to heart disease but scientists haven’t been able to understand how, exactly, it breaks your heart. Last week, researchers in the U.S. released results from a long-term study that shed light; they found that air pollution thickens blood and hardens arteries, accelerating atherosclerosis — a disease in which plaque (calcium, fat, cholesterol and other substances) builds up in arteries, preventing oxygen-rich blood from reaching organs or body parts. This leads to the development of other diseases based on which arteries and body parts are affected, including heart attacks, stroke, or even death.

The study tracked 6795 participants in 6 U.S. cities between the ages of 45-84, all without a previous history of cardiovascular disease. Participants ranged from four ethnicities and came from a variety of socioeconomic backgrounds. Researchers then scanned participants’ arteries over a course of 10 years.  At the same time, they measured concentrations of PM2.5 and traffic-related gases called nitrogen oxides (NOx) outside participants’ homes, while creating estimates for the concentrations of pollution participants inhaled during time spent indoors.

The study found that PM2.5 and NOx were strongly associated with the build up coronary artery calcium, which accelerates atherosclerosis. Joel Kaufman, the lead author and a professor at the University of Washington, explained to ThinkProgress that air pollution may trigger cell inflammation, affecting white blood cells that protect the body against infectious diseases. As white blood cells accumulate, they build up plaque, causing atherosclerosis. This mechanism may explain why air pollution has also been linked to cardiovascular problems and mortality.

Though the results of the study are sobering, it’s important to note that the study was done in the U.S. under air pollution levels that fall well below the World Health Organization’s recommended PM2.5 exposure of 25 μg/m³.

Comparatively, North Indian cities tend to have significantly higher annual average PM2.5 levels, with Gwalior at 176, Patna at 149, and Delhi at 122. Further research needs to be conducted to understand how such high levels impact the severity of plaque build up and heart disease. However, a comprehensive Global Burden of Diseases, Injuries, and Risk Factors Study calculated that about 5.5 million people prematurely died in 2013 because of indoor and outdoor air pollution.

Bhumi spent several years working with small-holder farmers in India, Kenya, and Sierra Leone. She recently returned to India to work on governance reforms. She helps Smart Air with social media outreach, grant proposals, and anything else that comes along.

Do N95 Mask Deprive Us of Oxygen