The lockdown caused by the COVID-19 epidemic saw the numbers of trucks and buses on the road reduce by 77% and 36%, respectively. Hundreds of factories were also closed for an extended period of time. Despite Smart Air analysis showing an increase in PM2.5 levels during February, there have been reports that over the period from January to April, PM2.5 levels have reduced by 18%. It’s reasonable that PM 2.5 is decreasing in China in March, but is that the case?

Smart air analyzed twelve of China’s major cities to see how their PM2.5 levels fared during the lockdown. 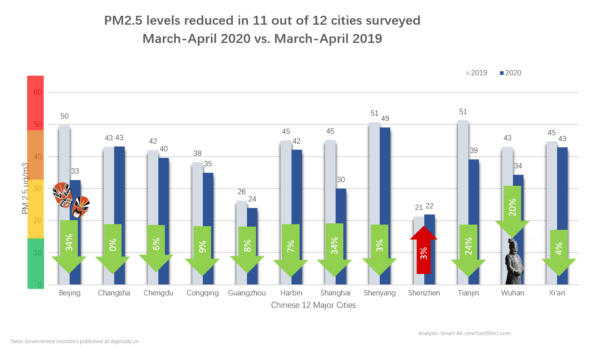 Out of the 12 cities analyzed, all of them saw a reduction in PM2.5 levels for March and April, compared to a year earlier, except for Shenzhen. 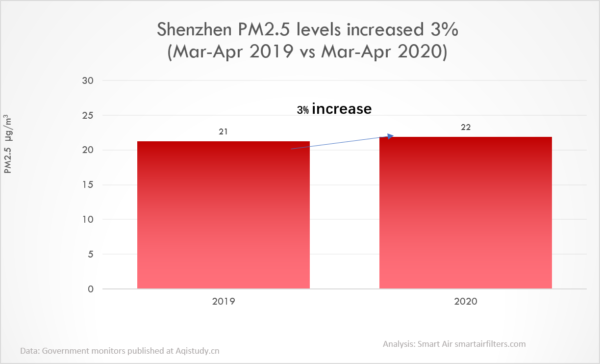 Shenzhen saw a modest increase in PM2.5 levels from a year earlier of 3%.

The cities that saw the biggest reductions in PM2.5 levels were Beijing, Shanghai, Tianjin, and Wuhan, with PM2.5 levels dropping up to 34% for Beijing and Shanghai.

To get a clearer idea of how China’s PM2.5 levels have been changing during the coronavirus lockdown, we can separate the data by month.

In March, China was still very much under lockdown, with many cities closed and transportation limited. 11 cities saw a reduction inPM2.5 in March. The only city to see an increase in PM2.5 levels during thiw period was Xi’an, with PM2.5 levels increasing 4%. 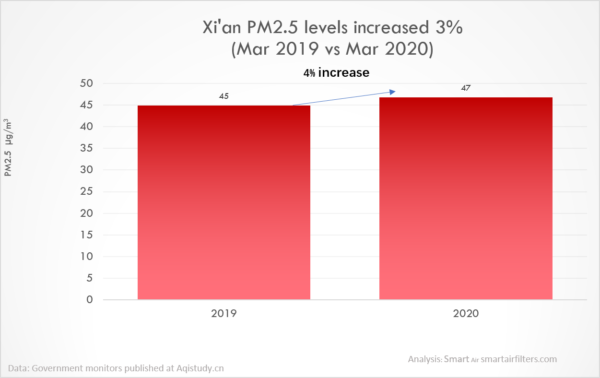 April saw a reduction in lockdown measures across several cities in China, which led to increases in electricity usage for April. April’s PM2.5 data seems to confirm this upwards trend in productivity and paints an entirely different picture to March. 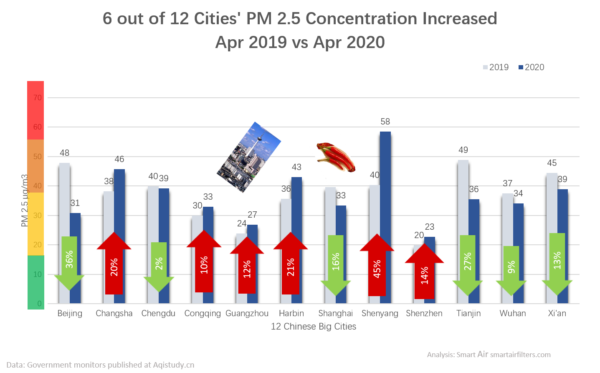 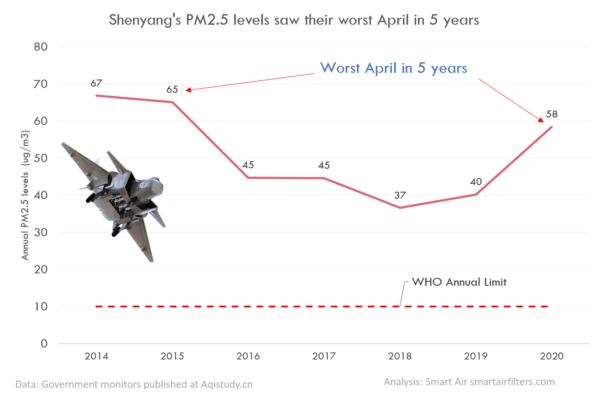 Possible reasons for Shenyang’s dramatic increase in PM2.5 levels could be due to an increase in traffic, cold currents and factories’ restart.

The Effects of The Coronavirus Lockdown on PM2.5 Levels

It’s clear that March – when restrictions on movement and work were still in place in China – pollution levels dropped compared with the previous year. Side by side analysis of China’s PM2.5 levels for a day at the end of March drive home this point (more green dots means better air quality). 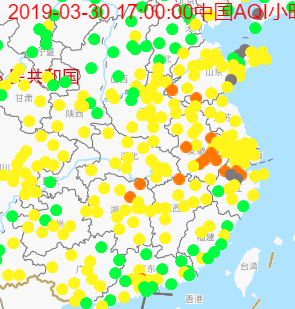 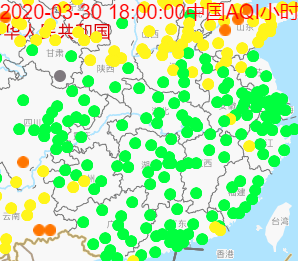 Despite the Lockdown, There’s Still a Long Way to Meet the WHO Air Quality Target.

The average PM2.5 levels in the 12 cities dropped from 42μg/m3 to 36μg/m3 when comparing 2019 to 2020. That’s an impressive feat. However, even despite the lockdown, China’s air pollution levels were still 3.6 times higher than the World Health Organization annual limit of 10μg/m3. Not a single one of the 12 cities analyzed were below the WHO annual limit. 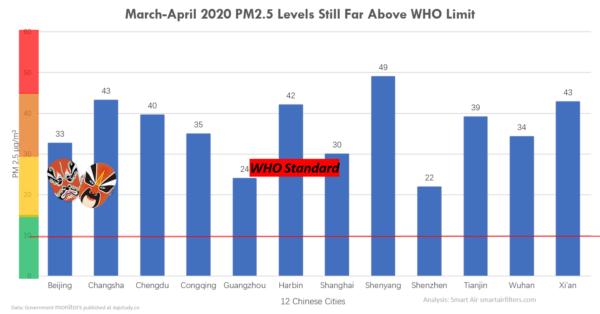 The average PM2.5 levels for 12 of China’s major cities reduced by 12%, in March-April, compared with last year. However, PM2.5 levels were still on average 3.6 times the WHO annual limit. What’s more, a month by month analysis shows a rebound in PM2.5 levels for April 2020.

How Much Pollution Do We Breathe Every Day?