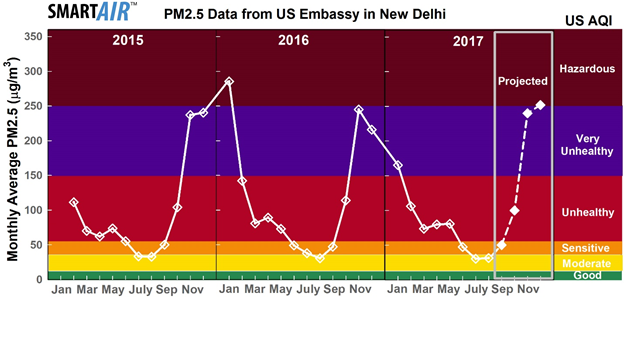 Delhi’s air pollution has raised a lot of concern over the last few years. Awareness peaks in the winter and then wane for the rest of the year. How well does this general awareness fit with the air quality data?

Smart Air analyzed PM2.5 data from the pollution monitor at the US Embassy in New Delhi (what is PM2.5?). This pollution monitor is considered a gold standard in the scientific community, although it is just one data point in a large city. From this data, we calculate an average PM2.5 level in micrograms per cubic meter for each month. Here’s how Delhi’s air has been month by month from 2015 to 2017. We have roughly extrapolated this data to create a projection for the rest of this year.

The data shows that people’s intuition is correct. Indeed, winter air is the worst and PM2.5 level becomes hazardous. In winter, people are more likely to burn coal and garbage for warmth, crop burning takes place in neighboring states. As a result, Delhi becomes a suffocating gas chamber.

Mother nature doesn’t help either. In winter, the surface of the earth gets cooler, and the air near the surface is also cooled. Next, this dense cooler layer gets trapped below a layer of warm air, causing temperature inversions. With less air mixing, pollutants are trapped near the ground for a long period of time.

Summer Is No Picnic Either

Yet summer is not safe either. Even the best months are far from levels that the World Health Organization considers safe (10 micrograms). At summer levels as well, Delhi’s air pollution causes heart attacks, strokes, high blood pressure, cancer, and other health problems.

Delhi’s air is unhealthy all year round based on PM2.5 data, especially more hazardous in winter.

Delhi residents should protect themselves all year and particularly in winter. Since the winter and Diwali season is almost upon us, get your air purifiers ready with new filters and keep your masks handy. Breathe safe!