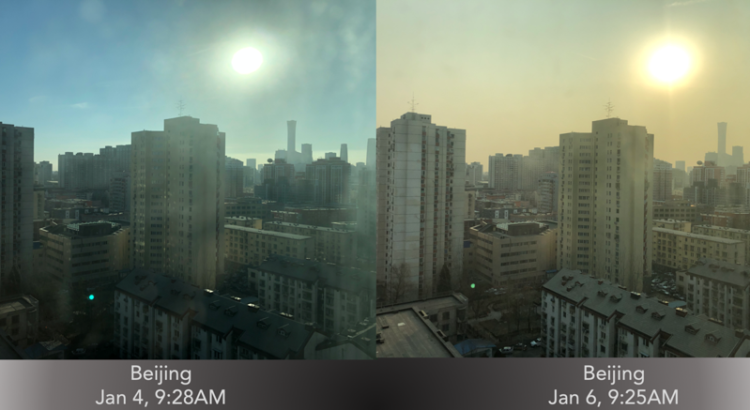 After a big improvement in 2018, new data shows China’s war on air pollution is slowing down. A Smart Air analysis of 2019 PM2.5 data for China’s 15 largest cities found that more than half saw worse air quality over 2018.

Maps comparing average PM2.5 in December 2018 to December 2019 show a general increase in PM2.5 across the country, especially in southern China.

Beijing’s improvement suggests that the 2013-2017 Clean Air Action Plan has had an effect. However, the improvement seems to go even farther back, since data stretching back to 1998 shows improvement even in the decade before the action plan.

One of China’s most important automobile manufacturing hubs, Guangzhou has moved to make cars on its streets greener. By 2020, the city plans to replace all gasoline-fueled buses with pure electric buses and encourage more electric vehicles by lowering purchase and maintenance prices, as well as increase charging stations.

One potential reason is insufficient gas supply infrastructure, making Xi’an still heavily reliant on coal. However, there is hope: if Xi’an achieves its goal to go coal-free by 2020, its PM2.5 should come down.

In addition, Shenyang, Tianjin, Chongqing, and Harbin all saw worse air in 2019.

All Major Chinese Cities Above WHO Limit

Despite the range of improvement and worsening air, all cities have this in common—they are all above the WHO annual limit. Even the cleanest city, Shenzhen, averages more than double the limit.

This fact carries consequences for people’s health, since studies show that PM2.5 raises blood pressure, inflammation, and rates of heart attacks and strokes. This is true even at low levels around 10 micrograms.

This analysis used over 33,000 PM2.5 datapoints pulled from official sensors around the country. However, it does not include gas pollutants like ozone, which have been rising in Beijing. Paradoxically, improving particulate pollution can actually make ozone worse.

Despite the harms of PM2.5, studies have found that wearing masks prevents effects on blood pressure and heart rate variability. Placebo-controlled studies of air purifiers have found that reducing particulate in the home prevents harm to blood pressure, inflammation, and immune response—even among young, healthy twenty-year-olds.

Melina is Smart Air’s Research and Development Engineer. She majors in Electrical Engineering in National University of Singapore