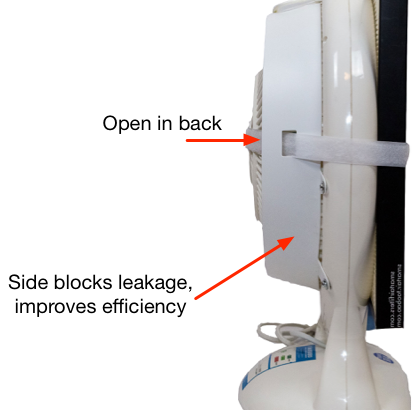 After I made my first DIY purifier, a design magazine called me up to interview me. I said, “You realize this has no design in it, right? It’s just a fan and a filter.” Now I actually have a design improvement! I’m calling it the DIY 1.1.

The data shows the Original DIY purifier significantly reduces particulate pollution in the home (1, 2). But it’s not perfect. If you put your hands on the sides of the machine, you can feel that some air hits the HEPA and then comes out the side of the machine.

So we wondered what would happen if we put a guard on the side. If that forces more air through the HEPA, it should improve performance. In true DIY spirit, we first made a couple DIY purifier versions:

After some positive initial test results, we designed a “fancy” plastic side guard to go around the back. Here’s what it looks like:

But does it work better? We put it to the test using real-world room tests and third-party CADR tests.

We tested the DIY 1.1 using the same room and method as my earlier tests. These tests use real air pollution in a normal apartment to see how much particulate the purifier can remove in the situation people use them most frequently—while sleeping. Click here to learn more about the testing methods.

More details about the test and the original data are available in the supplemental materials.

One thing I like about room tests is that they’re in real life conditions, exactly how normal people use purifiers. That means room tests take real-life factors into account like leakage from windows and a person moving in the room.

In CADR tests, the tester burns (or sprays) particles into a sealed room rather than using naturally occurring pollution in the home. CADR tests are less realistic, but the big benefit of CADR tests is that they are more tightly controlled. They give more precise estimates of the differences between two machines than the real-world tests.

With that in mind, we asked a third-party testing organization in Fujian to conduct CADR tests with the Original DIY purifier and the 1.1. They burned a cigarette in a standard 30m3 sealed room for the 20-minute CADR test (more details on CADR tests in this guide).

The 1.1 design increases the CADR by 15%. That’s not bad for a plastic fin! A CADR of 101 cbm/hr is equivalent to the Blueair S1 as measured by independent AHAM CADR tests.

Effectiveness is the most important thing to a numbers guy like me, but the new version also has two other small improvements.

We added a metal mesh in front on the fan blades. That makes the fan safer for from children’s fingers and doggie paws. It’s something we’ve always had people worry about. With the added mesh, we think the DIY 1.1 will fit nicely in a child’s bedroom.

The DIY purifier has always been really simple. It’s a filter strapped to a fan. But with the Original DIY purifier, the filter would sometimes slip off. In contrast, the DIY 1.1 has slits that keep the strap in place. For people with clumsy hands like me, the slits make it easier to strap on the HEPA, and stops it slipping off if it gets bumped or nudged.

After seeing the data, I’m ready to release the new DIY 1.1 on the Smart Air homepage and Taobao store for 228 RMB.

As always, I’m publishing more details on the methods and the original data for fellow nerds here.

Dyson Got These 3 Facts Wrong about CADR | Review