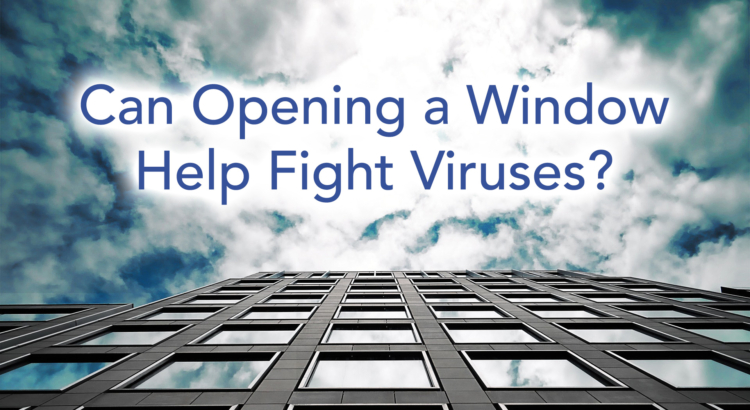 Data shows that having good indoor ventilation can reduce the chance of virus transmission. Armed with that knowledge, can something as simple as opening a window be effective solution to fighting COVID-19 and reducing virus transmission indoors?

Before we can say how effective opening windows really is, we need to know what our target for indoor ventilation is.

Learn more: what are the recommended ventilation rates for homes, offices, schools and shops »

So, can opening windows achieve these ventilation levels?

Data shows that opening windows in hospitals can improve air circulation by almost 20 times, from 1 air change per hour up to 20. That’s great!

However, that was only the case for ‘old-fashioned’ hospitals with large windows and doors. When scientists tested more modern hospitals with smaller windows, they found ventilation rates were half those of the older hospitals.

However, for both the modern and old-fashioned hospitals, opening the windows increased the air changes per hour above the 6-12ACH recommended by the CDC.

That’s for hospitals, which are designed with high ventilation in mind. But how about at home? Scientists from the US  tested the effect of opening windows on the ventilation in a home in Cary, NC.

If the goal is to reach the CDC’s recommended ventilation rate of 6 – 12 ACH, in an attempt to reduce COVID-19 transmission, then opening windows alone is not enough.

If windows don’t give a high enough air flow, then how about opening doors? The scientists in the US also studied this. The scientists simulated a real home by opening the door from 3 to 60 times per hour, as if people were entering and leaving the home. Here’s what they found:

That’s on par with opening the doubling in ventilation that occurred when opening windows. However, it’s still a long way off 6-12 air changes per hour the CDC recommends. If air changes in the order of 6-12 really are required, then the best ways to achieve this may be increasing the internal HVAC system, using a fan to blast air in/our of a window, or to install an air purifier.

Opening doors and windows seem like simple, easy ways to increase a room’s ventilation. But there are other downsides. Here’s a summary of the advantages and disadvantages of opening windows and doors to increase ventilation:

For buildings with large windows and high ceilings, opening windows can dramatically increase the indoor ventilation. However for more typical houses, offices and schools with smaller window, the improvement to ventilation is minimal. Other approaches such as using HVAC or running an air purifier may be more effective.

These are the Recommended Ventilation Rates for Offices, Homes, Schools and Shops