Analysis of the latest air quality data by Smart Air found that PM2.5 levels in Ulaanbaatar fell by 23% in the 2019 winter. The main reason is likely to be a new initiative introduced by the Government of Mongolia in May 2019 to from coal-fired stoves.  Despite the improvement, the average concentration of small PM2.5 particles was still solidly in the “unhealthy”range and often spiked into the “very unhealthy” and “hazardous” ranges. Pollution levels during winter 2019 were still 10 times higher than the WHO recommended limit of 10µg/m3. 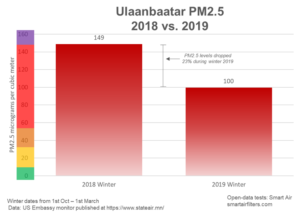 Comparing data from the past five years, the 2019 winter pollution levels were the lowest, 9% lower than the previous best of 109µm/m3 seen during winter 2017.

Analyzing data on a month by month basis, we found that PM2.5 levels decreased in all months from winter 2018 season. 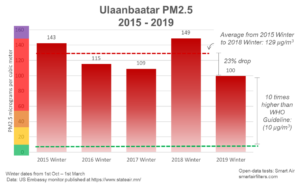 Why was Ulaanbaatar’s air cleaner this year?

Government’s ban on the transport and combustion of raw coal within Ulaanbaatar city limits. In its mandated city-wide switch to improved fuels, the Government produced and distributed over 600,000 tons of improved fuel briquettes. The improved fuel than the raw coal typically used by Ulaanbaatar’s ger neighborhood residents during Mongolia’s frigid winters. 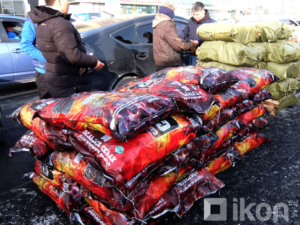 However,  PM2.5 reductions were notably higher in October to December when compared to other months – 36% for these months, as opposed to only a 23% reduction for January and February. Why? Evidence suggests that shortages of the improved fuel briquettes toward the end of the winter led some Ulaanbaatar residents . In other words, the improved fuel effort lost momentum.

A 20% reduction of PM2.5 is an impressive feat. It appears that the use of improved fuel briquettes is actually paying off. But there’s still a long way to go. Studies have found that even low levels of air pollution are harmful to health. Data shows that wearing masks can reduce the effects of air pollution on blood pressure and heart rate variability, and  placebo-controlled studies of air purifiers have found that reducing particulate in the home limits the effects of air pollution on blood pressure, inflammation, and immune response—even among young, healthy twenty-year-olds.