Let’s break down this question into three smaller questions:

1. Is the air coming out of the Smart Air DIY air purifier clean?

This is the easiest question to answer, and we do it by holding a Dylos DC1100 Pro particle counter in front of the purifier and watching the numbers drop. Here’s a video of Thomas doing just that:

Conclusion: Yes, air coming out of the purifier is clean.

2. Is the Smart Air DIY air purifier able to actually clean the air in the entire room?

Answering this question is more difficult because you need a controlled environment (for example, you don’t want to walk in and out of the room during the test), and you need to test the air for a longer period of time. But fortunately for you, Thomas is a huge nerd and does this kind of thing for fun.

To answer this, Thomas set up the particle counter on one side of his 13.5 m2 bedroom and put the DIY filter on the opposite side of the room. Here’s what our filter did in one hour: And over the course of eight hours: 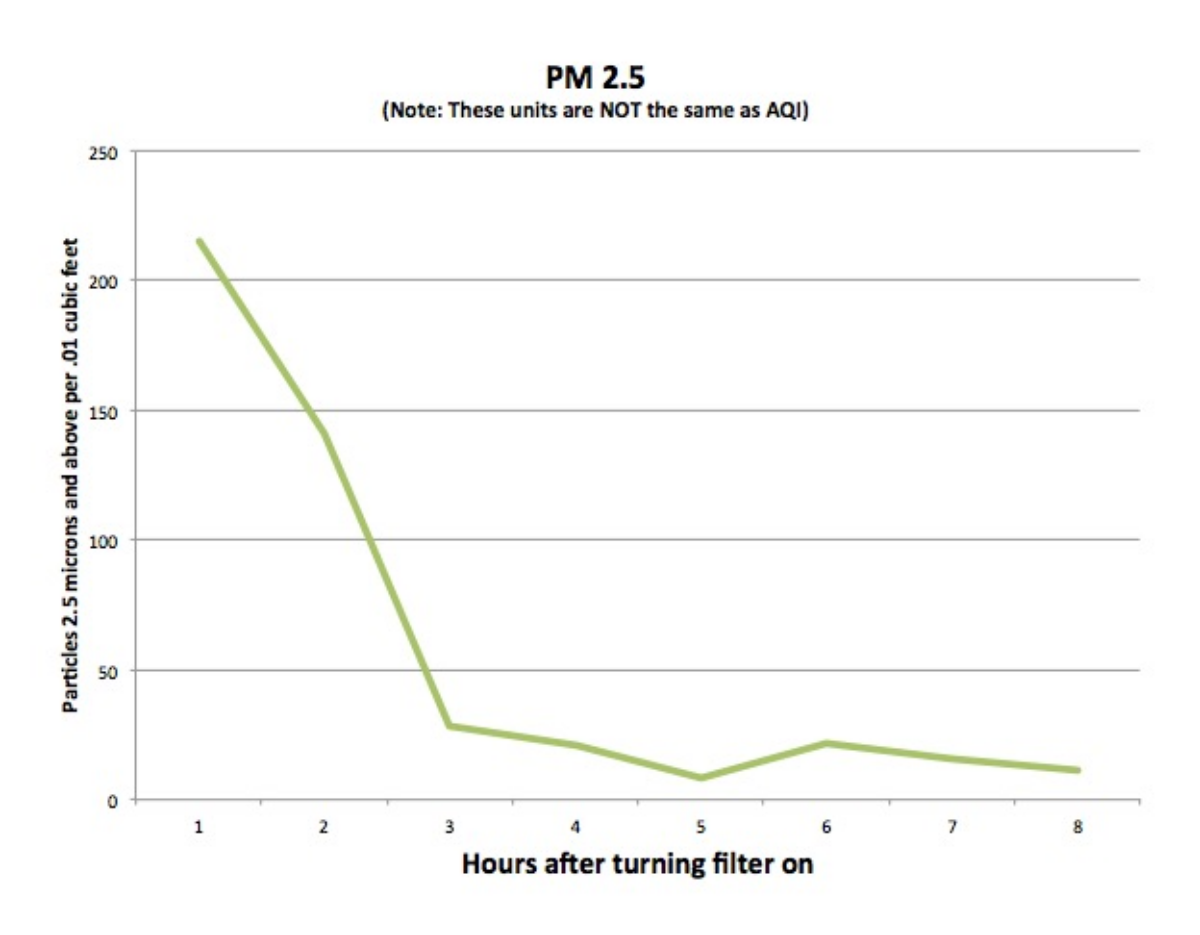 The particle counter also gives data on .5 micron particles — even smaller than the 2.5 micron reading. Here’s what that looks like over eight hours: Conclusion: Yes, the clean air from the DIY filter is cleaning the entire room.

Want to know more about our methodology? If you’re a data nerd like us, click here for the full methodology.

To do that, Anna ran 11 overnight tests with the BlueAir, 9 tests with the Philips, and 11 tests with the IQAir. Thomas calculated effectiveness as percent reduction in particulates from the room air. Anna tested the air before she turned on the air filter, and then set the particle counter to take hourly measurements of the air in her 15m2 Beijing bedroom. Anna used the highest setting on each filter. All of the filters significantly reduced particulates, but the 470 RMB Cannon removed as many particles as the highest-performing big brand. Even the 200 RMBOriginal was only 6% behind the Blue Air on the .5 micron particles and 4% behind on the 2.5 micron particles.

Among the different brands, there seems to be no relationship between price and particulate removal: Conclusion: You can remove particulate pollution from the air in your home and pay far less than the cost of a Blue Air, Philips, or IQAir.

Want to know more about our methodology? If you’re a data nerd like us, click here for the full methodology.

Have any questions about testing? Send us an email!
We’re not PhDs in fluid dynamics, but we love to talk shop about clean air.

For fellow nerds, here are some more details on how the tests were conducted:

The test above was done starting at 11:30 pm on 6/16/2013, when the outside AQI in Beijing was 230 according to the US embassy’s AQI Twitter feed. (The outside air improved the next day, but results were similar on a later test where AQI actually went up slightly from 195 to 202 during the test.)

According to comparisons of our particle counter’s tests of outside to US embassy AQIs, an AQI of 230 would convert to about 2,650 on the PM 2.5 count on the reader. (Remember, the particle counter gives the raw number of particles 2.5 micrometers and above per .01 cubic feet. The US embassy takes mg/m3 and converts that to an AQI. Therefore, the raw numbers are different, but they correlate highly. You can think of this as the difference between measuring attendance at a basketball game by the number of people in the stadium versus the total weight of those people. The two numbers are highly correlated, but not identical.)

Thomas did the test in his bedroom with the doors and windows closed. The room is 13.5 m2, with two windows.

The particle counter tends to take 5-10 minutes to get stable readings, so to be conservative, Thomas gave it about an hour:

The spike at the top was when Thomas entered the room to turn the air purifier on and reset the machine, so it may be the dust he kicked up by walking around. A more stable reading for that time would probably be about 230.

The uptrend prior to turning the filter on may have been because Thomas was running a dehumidifier (which itself has some small filters) in the room before the tests.

Regardless, this data suggests that the effect of the filter was not a confound of calibration.

Here’s how we performed the purifier comparison

For fellow nerds, here are more details on our data and methods:

Calculating Effectiveness: Thomas calculated effectiveness as the percentage of particles the purifier removed from the room air. The baseline was the particle count before turning on the purifier. The final count was the average number of particles over the last four hours before Anna woke up. We prefer this over comparisons to outside air because:

1. Indoor air is cleaner than outdoor air, even without a purifier (although that doesn’t mean it’s safe).

2. The baseline room number takes into account how dirty the outdoor air is because indoor particulates go up and down with outside air.

For more details on the methods, see the end of Thomas’s earlier post. All methods were identical to those earlier tests.

Outlier: Of the 11 tests, one day was a strong outlier. On May 22nd, the IQ Air got only 68% of the .5 micron particles. Normally when we see poor results, it’s because the outdoor air got a lot dirtier during the night. But on May 22nd, the outdoor concentration fluctuated between 74 and 110 micrograms, which isn’t out of the ordinary.

Because we couldn’t see any reason the results were poor that night, we left the data in. If we redo the analysis with that day included, the results are only slightly better: 93.0% of .5 micron particles and 96.5% of the 2.5 micron particles. That would put the IQ Air about equal with the Philips and still 4% below the Cannon.