Lots of people are buying air quality monitors these days, but how do they compare to the official pollution numbers–are they accurate? When I bought a Dylos DC1100 Pro laser particle counter,  I did a comparison test with the US Embassy. I put my Dylos Pro outside the window of my apartment (at Nanluoguxiang) 70 times and compared the numbers to the US Embassy’s Twitter feed at the same time. I found that the two numbers were very strongly related: r = 0.89 (remember the highest possible correlation is 1). I did that test with the Pro model, but there’s also a standard model that’s $70 cheaper. At Smart Air, we call it the Standard Dylos.

How does this cheaper machine compare to the government measurements? If it’s similarly accurate, great! That means people can save money and get roughly similar results. 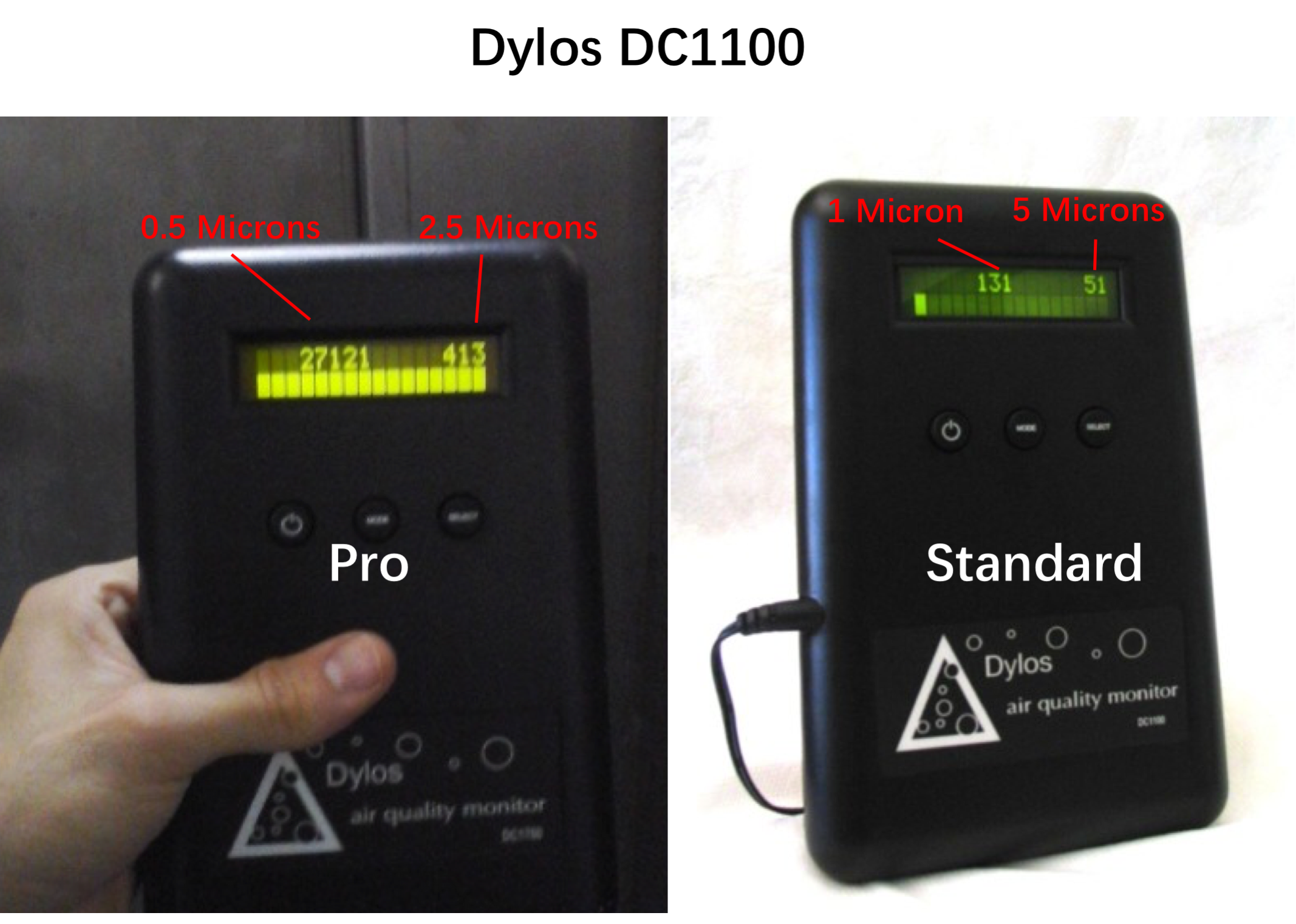 The Dylos Pro and Standard are almost the same judging from their front looks. So what’s the real difference? 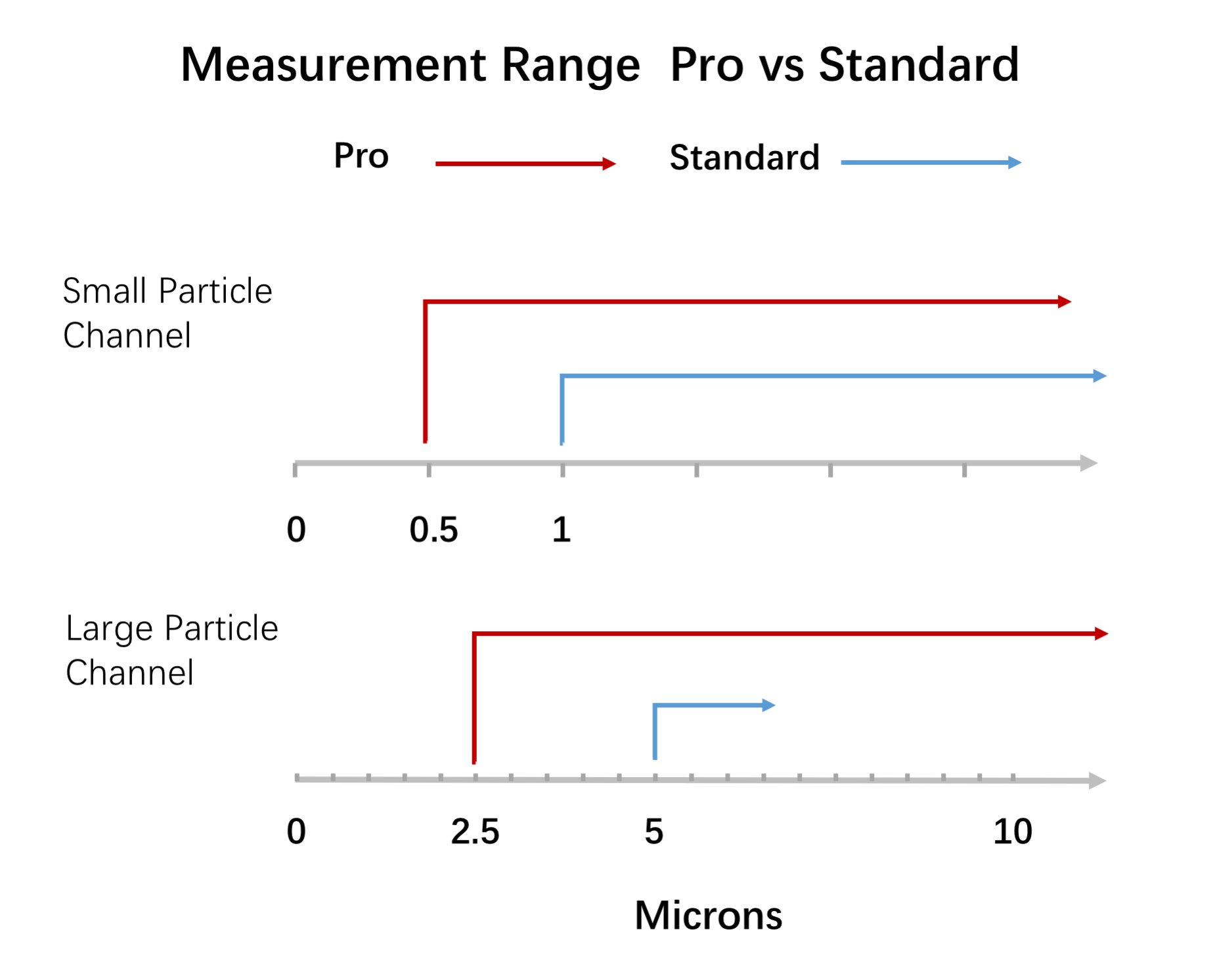 The machine governments use is called the Met One BAM. It measures particles 2.5 microns and below (here’s how government PM2.5 sensors work). If we put the measurement ranges of the BAM, the Dylos Pro, and the Standard Dylos together, here’s what it looks like: Luckily I’m not the only nerd interested in air pollution problem. An American living in Guangzhou bought the Standard and teamed up with me to test it against the US Consulate.

From November 12th to 17th, she collected data with her Dylos Standard 70 times outside her apartment,which is close to Sun Yat-Sen University in Guangzhou. She also recorded the numbers of PM2.5 concentration released by the US Consulate. Remember how well the Pro correlated with the US Embassy? Here’s what I found before (r =.89).

Later I did another test by putting my DC1100 about 100 meters away from the US Embassy (much closer than my apartment). This time it turned out that the two numbers correlated at r = .9 – slightly higher than in the first test. How does the Standard Dylos compare? Here’s what we found: They correlate at r = .85! Although that’s a bit lower than the correlation between Dylos Pro and US Embassy, the two numbers are still strongly related. I think that result would surprise most people.

Using this data, we can get a rough formula to convert between the Dylos 1 micron and the official numbers. For example, the 24-hour WHO limit is 25 µg/m³, which is approximately 1,250 on the Standard Dylos. The simplest formula to convert the Dylos 1 micron to PM 2.5 micrograms is:

If we use that formula to convert the Dylos numbers to micrograms, here’s how well the numbers compare: 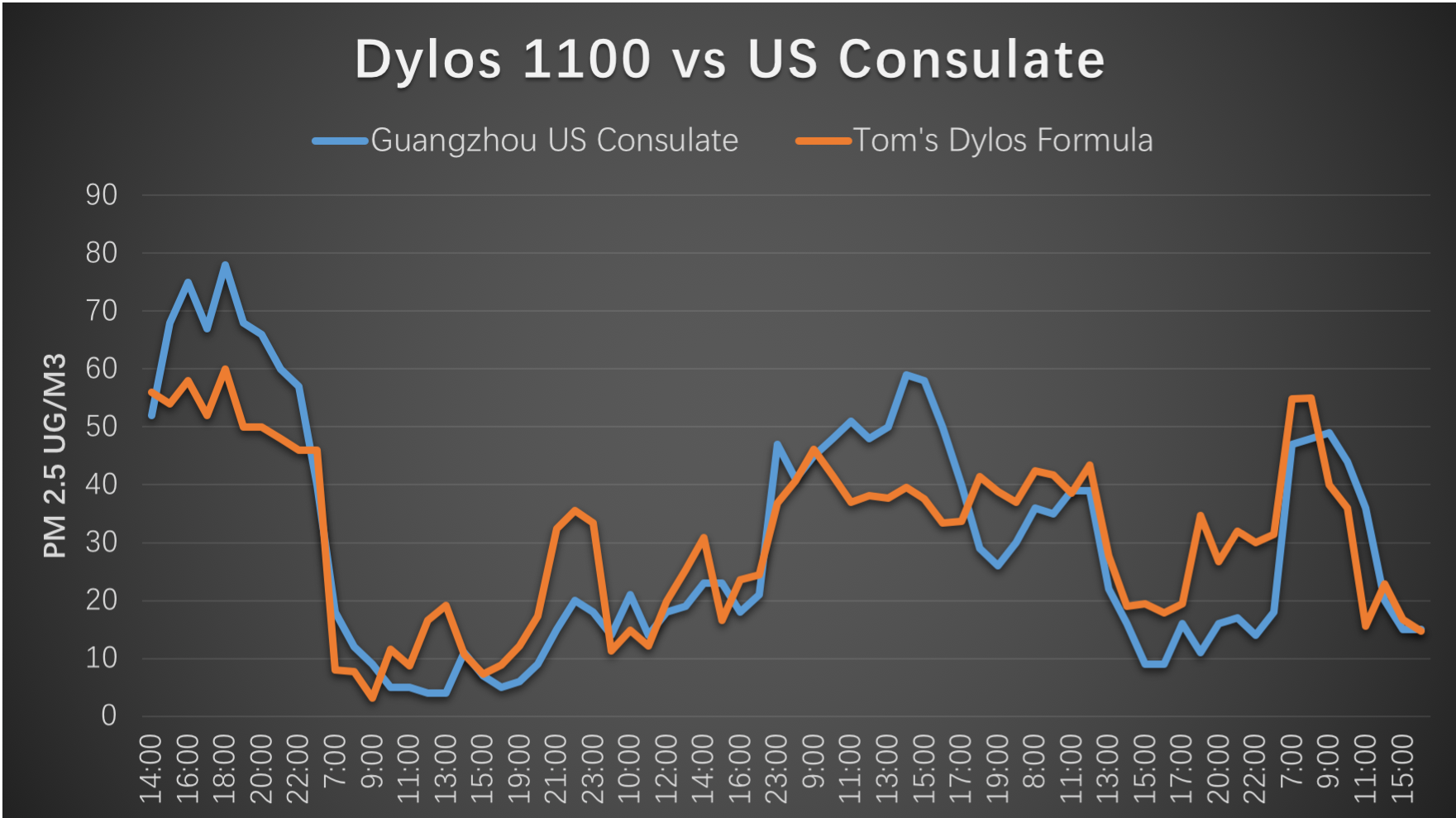 On average, the formula was off from the government numbers by 9.04 micrograms. That’s roughly as much as the average deviation of the Dylos Pro in our separate particle counter tests.

The Standard correlates highly with the government numbers—only slightly less well than the Pro model.

The conclusion is based on only one test in Guangzhou. We could draw stronger conclusions if we had more tests done in different locations and in different seasons.

As always, I’m making the data and more testing details publicly available for fellow nerds, as well as a new test addressing some other factors like humidity.

P.S. Thanks to Yiwen Wang for help translating and creating figures.

Want to learn more about Air Quality Monitors? Join thousands more and stay up to date on protecting your health.

How Accurate is the 1 Micron Dylos? New Test

Is the Laser Egg Only Accurate in Beijing?
Subscribe
7 Comments
Inline Feedbacks
View all comments