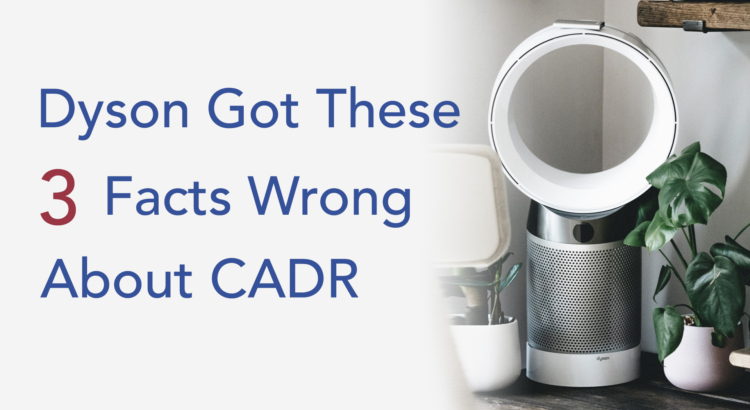 When Dyson launched their Dyson Pure Cool Air Purifier, I was excited to see what new tech or super-efficient design they would bring to the show. But what I found was that Dyson hadn’t changed air purifiers, just air purifier marketing.

I shouldn’t have been surprised the Dyson air purifier brought nothing new to the show. Purifiers are just fans and filters and filters after all. They’re so simple anyone can DIY their own.

But when Dyson’s purifiers failed to stand out from the crowd in head-to-head tests, Dyson started criticizing the test. In the case of air purifiers, that industry standard test is the “clean air delivery rate” (CADR). Here’s the Smart Air Sqair getting tested for CADR performance.

Dyson points out that the CADR tests are done in a lab room under conditions that don’t represent real-world rooms. That’s true, and CADR isn’t perfect. That’s why real world tests are still very important – Dyson created their own test. However, in explaining why Dyson’s test is superior, they got a few things wrong about CADR.

The Three Misleading Things Dyson Got Wrong About CADR

Dyson’s website claims that CADR doesn’t “focus on how well a purifier captures differing particles sizes.” That’s flat wrong. There are essentially two standards for CADR tests. The AHAM (US) test and the GB-18801 (China) standard. The US standard tests for particles in three ranges, which they call ‘dust’, ‘pollen’ and ‘smoke’.

The Chinese GB-18801 standard also tests and reports filter efficiency for particles ranging 0.30 – 10 microns. That covers from the smallest, hardest-to-capture PM0.3 all the way to large dust and pollen particles. Here’s that test for Smart Air’s Sqair air purifier.

This one’s right, but misses the point. There are two main ways to describe purifier effectiveness:

The whole-room effectiveness is really what most users care about, and that’s what the CADR test measures. For single-pass filtration, there’s a separate official test and rating system for that, the EN1822 test. Elsewhere on their website Dyson mentions that test, so they’re aware of it.

In fact, the EN1822 is what defines the HEPA standards like H13 we often see. If we want to know about single pass filter efficiency, then we should look at the HEPA filter’s rating (e.g. H13/H14 etc.).

CADR tests for whole-room effectiveness. For HEPA filter efficiency, then we should use the EN1822 HEPA rating system instead.

This is wrong. In fact, Dyson even contradicts themselves on this one. On their English website they say CADR tests for particulate. But on Dyson’s Chinese Tmall Product Page they provide CADR results for benzene and formaldehyde (gases).

It’s possible that Dyson is only referring to the US (AHAM) test here. In which case they’re correct – the AHAM test doesn’t test for gases. If this is the case, then Dyson should point this out, stating clearly that actually the GB-18801 test does test for gases.

CADR tests have their downsides, the main one being that they don’t represent real world rooms. It’s great to see Dyson promoting real-world tests for air purifiers, just like Smart Air. However, CADR tests still have their use in helping air breathers make informed choices when buying air purifiers.

Dyson doesn’t publish CADR rating or results from their internal tests on their website. If Dyson provides this, consumers will have more information on hand to make better informed decisions. Data rules!

Note: In China CADR results are required by law, and we were sure Dyson would publish them there. We got in touch with Dyson’s China customer service team, and sure enough they have the CADR test results. Dyson’s Pure Cool TP05 air purifier has a particulate CADR of 163m3/hr, and a formaldehyde CADR of 56m3/hr (source: scroll to the very bottom here).

Dyson Engineer David Hill said “We believe all air purifiers should be tested this way [using Dyson’s method]”. If Dyson’s test really is better than CADR, then openly publishing the testing method will benefit all air breathers around the world.

The air purifier industry is opaque, not open. It’s profit-driven, not health-driven. Big companies charge hundreds or thousands of dollars for technology that was invented over 70 years ago. We created Smart Air to bring open data and purifiers that are simply effective into an opaque industry. We provide no-nonsense, honest purifiers to people (like us) who just want to breathe safe air.

Is the Molekule Air Purifier Really Better Than Those Already on the Market? Review
Subscribe
0 Comments
Inline Feedbacks
View all comments