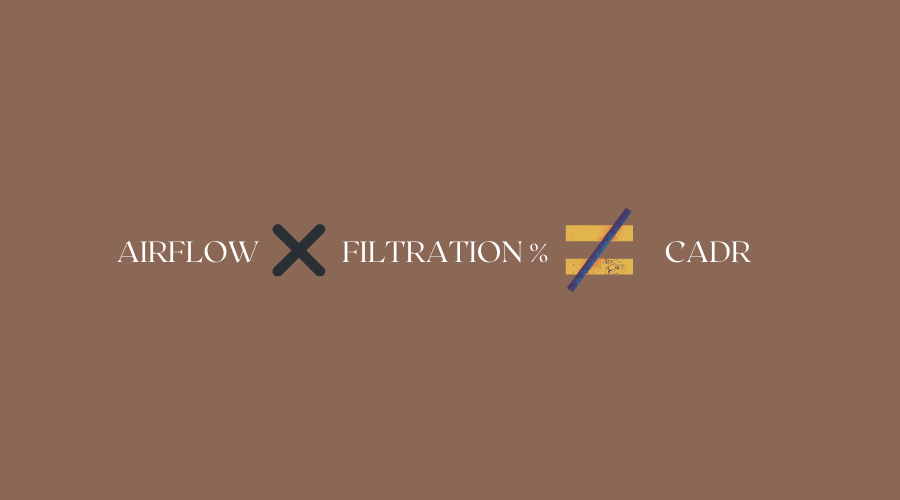 CADR tests, used to calculate an air purifier’s effectiveness at cleaning air, are typically used to compare the performance of different purifiers. However, performing a CADR test is not simple: it requires a particle monitor, a sealed 30m3 test lab, and tightly controlled testing conditions.

On the surface, this approach seems far simpler and easier to do than running a CADR test, however, several factors mean this method cannot be used to directly compare with CADR values calculated using one of the CADR standards.

Can Airflow Values be Converted to CADR Values?

In short: no. Long answer: you can calculate an estimated CADR for a given machine using this method, useful for internal comparisons, but it should not be used to compare with existing purifiers tested using one of the CADR standards.

At Smart Air, we use airflow and CADR tests when testing purifiers like the Blast air purifiers. We use both because each has its own advantages. Airflow tests give a quick & rough estimate of a purifier’s effectiveness; CADR is more precise. Because we do both types of tests, we can see how CADR and airflow values are on average for a range of purifiers.

From this range of 5 air purifiers, we saw that tested CADR values were just 60% of tested airflow results. The drop was greater for the Blast and Blast Mini. This 60% value can be used as a handy rule of thumb where CADR values aren’t available. However, it may not be applicable to all air purifiers. If in doubt, it’s recommended to obtain CADR values directly via testing.

There have been a lot of great tests run by researchers in Europe and the US comparing CADR numbers with airflow x efficiency numbers for DIY air purifiers. The tweet above is just one example. A group of Spanish researchers suggested using a correction factor of about 10% – slightly less than the 40% suggested by Smart Air’s data above.

Read More: How we test out air purifiers at Smart Air

Bottom Line: How to Calculate CADR From an Air Purifier's Airflow

“Airflow x efficiency” can be used as a way to quickly estimate a purifier’s CADR. However, it should not be used to compare purifiers, unless they were all tested using the same method. When using “airflow x efficiency” as a quick rule-of-thumb, watch out for the 4 factors that may affect this, and you may need to use a correction factor.