…compare to the measurements of the huge stationary air quality monitoring stations that governments use, like this one in New Zealand: If you look at the US Embassy’s Twitter feed, you’ll notice that its raw numbers are “concentration.” These are micrograms per cubic meter (µg/m³). The way government (BAM) machines work is that they use a source of carbon 14 that emits beta particles. Then they measure how many of those beta particles make it through a dirty filter and to a detector. They then use those numbers to estimate the weight of those particles (micrograms).

In contrast, laser particle counters like mine use a laser and a photo diode sensor to estimate the number of particles in the air. I don’t see why the weight should be any more important than the number. They’re both telling you how much particulate pollution is in the air. 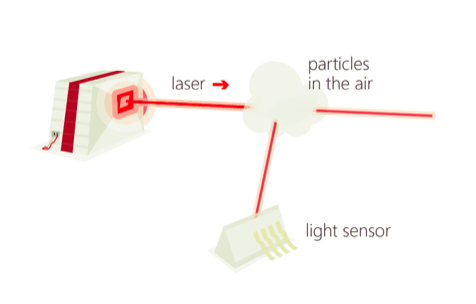 As an analogy, imagine we want to understand the crowd at a basketball game. We could count the number of people, or we could weigh those people. Of course, the more people, the heavier the total weight. And of course, the two numbers won’t correlate perfectly. We might have more heavy people on some days and more children on other days. But the weight and the total number should correlate highly.

To see how the two numbers compare, I put my particle counter outside my second-story window 70 times (that’s nerd dedication!). Then I compared my numbers to the US Embassy’s Twitter feed at the same time. Here’s what they look like: 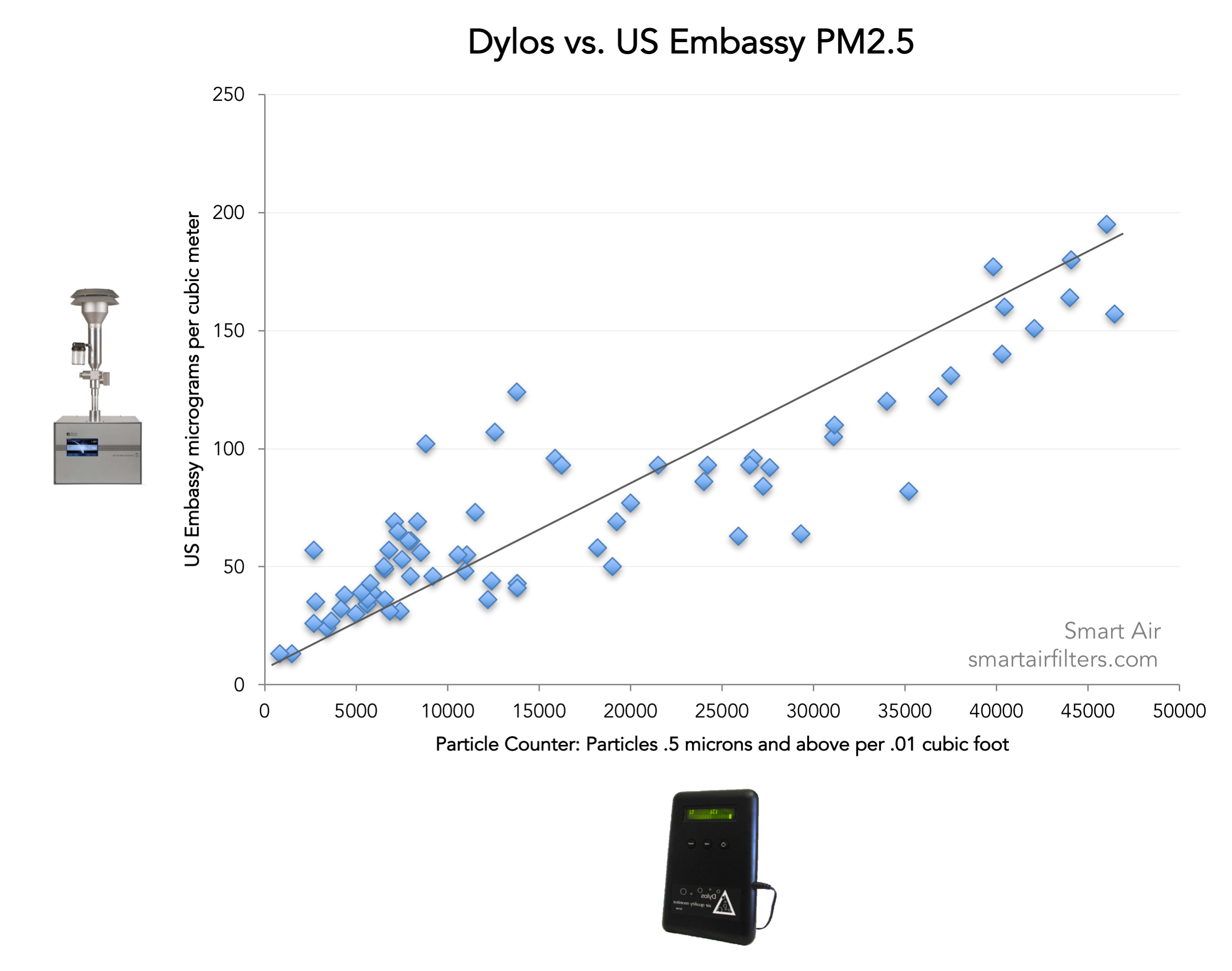 They correlate at r = .89, meaning the two numbers are very strongly related (remember the highest possible correlation is 1). That high correlation is especially impressive given that my house is near Gulou, and the US Embassy is out in Liangmaqiao–about 7 kilometers away.

The difference between the readings was particularly noticeable on days where a strong wind moved through Beijing. I noticed several times that my particle counts would drop before the embassy’s counts as the wind moved in from the west (where my house was) to the east (where the embassy is). (Remember, Beijing’s air gets a lot cleaner when we get winds from the west.)

Converting The Dylos to Micrograms

If we want to get a rough conversion between the numbers, we can remove a few of the outliers and compute a regression line. On that line, a government concentration of 100 micrograms (four times the WHO limit!) is approximately 25,000 on the Dylos particle counter: 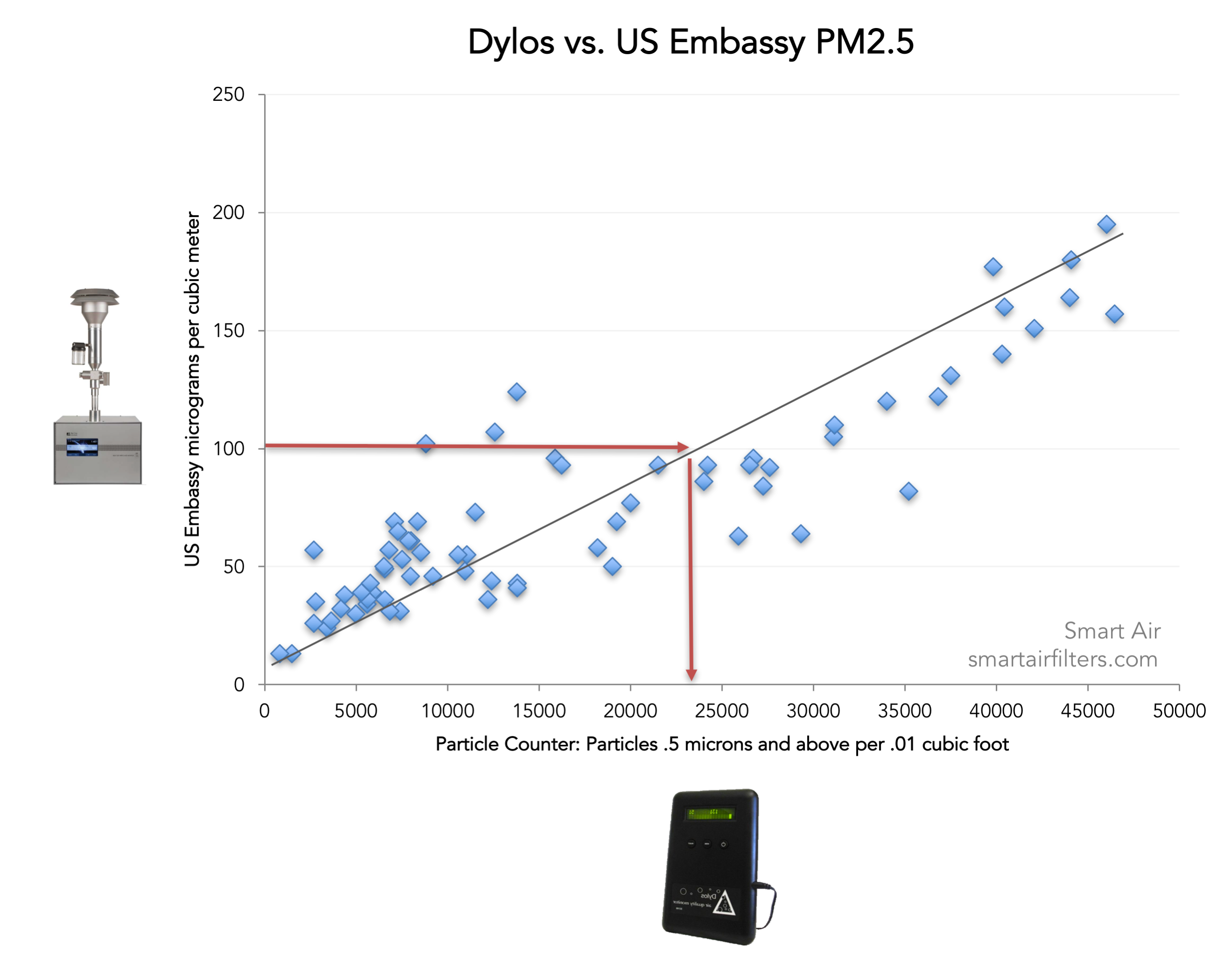 During my home tests (before turning my filter on), the air inside my home was very often above 3,000. That’s despite the fact that it was still much cleaner than outside.

Conclusion: The Dylos particle counter is giving measurements that are highly related to the much larger air monitoring stations. The scale is different, but the two can be roughly converted.

Read more: Check out my later tests of the non-pro 1 Micron Dylos. Later, I ran a comparison test with other cheap particle counters.