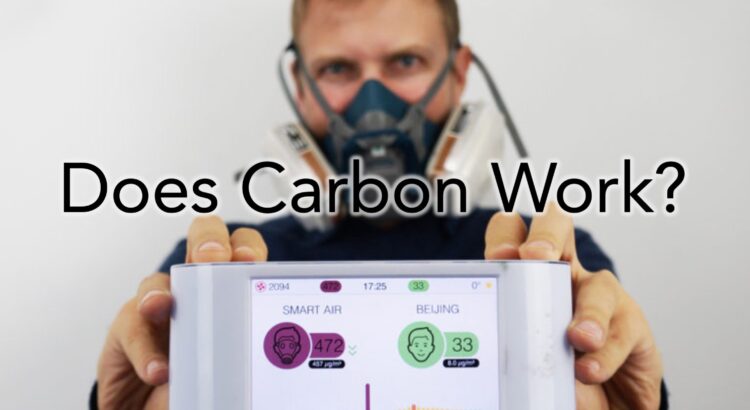 I wrote early on that my number one concern in China is particulate pollution. It’s on so many people’s minds that nowadays even the guy I buy chuan’r from knows the word “PM2.5.”

During the gas test, all of the doors and windows were closed. Because the test took place in an enclosed porch, there were several windows, which means the room was less well sealed than an interior room.

During the test, I burned three Marlboro cigarettes pointing straight up in an ash tray on the floor. The gas detector was on a small ledge at just above waist height, only a few feet laterally away from the cigarettes. The purifier was placed a couple feet from the cigarettes in the center of the porch with the air stream pointing upward.

Burning three cigarettes in a small room is extreme. With the exception of airport smoking lounges, few places will have this much smoke in one place. However, the test does demonstrate that carbon reduces VOCs.

Many people have asked me how long carbon filters last. Unfortunately I don’t have a good answer to that. The carbon filter I used was still effective after several of these powerful smoke tests, which should be far more VOCs than a normal person would face, but I cannot say more than that.

VOC Info: The PID lamp has an eV rating of 10.6. eV ratings determine what types of VOCs PID machines can detect. With a rating 10.6 eV, this machine was probably reliably detecting benzene, which has an ionization potential of 9.25 and perhaps toluene, which is at 8.82.

This PID lamp is not designed to detect formaldehyde, which has an ionization potential of 10.88. However, I later conducted tests with formaldehyde samples and found that the MX6 could detect it, and an engineer at Industrial Scientific told me he thought it was plausible that the machine would pick up on formaldehyde, although not 100% reliably.

The MX6 came with a pump to draw in air (as opposed to versions that passively sample air). During the test, the MX6 had a filter on designed to prevent particles from entering the machine. I zeroed the machine if necessary before the test.

As I started doing the tests, I was still figuring out how to do the tests–it seems simple when you look at the results, but tests like this are not easy! For the first three control tests, I had not yet decided to let the MX6 run for 30 minutes after the cigarettes burned out, so data is limited for those three occasions. However, the conclusions are similar with those three tests excluded.

In the control condition, I used a Honeywell fan on the low setting to approximate the air flow of a Cannon on high with a filter on it. The point is that filters lower the air flow, so the Honeywell may be a better approximation of the amount of air flow during the experimental condition.

In addition, I ran tests with an IQ Air Health Pro Plus (1) with the filters removed and (2) with the pre-filter only as additional control tests. The results were similar to the Honeywell fan-only tests. I’ll use the IQ Air tests as the control condition in tests of the IQ Air’s ability to remove VOCs in the future.

The table below summarizes the gas tests. Because the raw data file is large, I’m making it available as a download from this file: Cannon VOC Tests

Anna only ran the carbon-only test for one day because it was an accident. More tests would give a more reliable estimate of the effectiveness of using carbon only, but because carbon isn’t designed to get particulates in general, I’m hesitant to subject anyone to that much dirty air. On the upside, the outdoor PM2.5 was very stable that day, only moving up 4 micrograms from start to finish.