Would Reducing Air Pollution Save Many Lives?

This graphic below shows how many people die each year when the average amount of PM2.5 in the area is at different levels.

Let’s say China has a bad year, and air pollution goes from 125 to 150 micrograms. Based on China’s population, that’d mean 60,000 more people will die.

That’s a lot of people. But that same increase—25 micrograms—would kill almost twice as many people (per capita) if it happened in a cleaner city like Paris or Seoul. 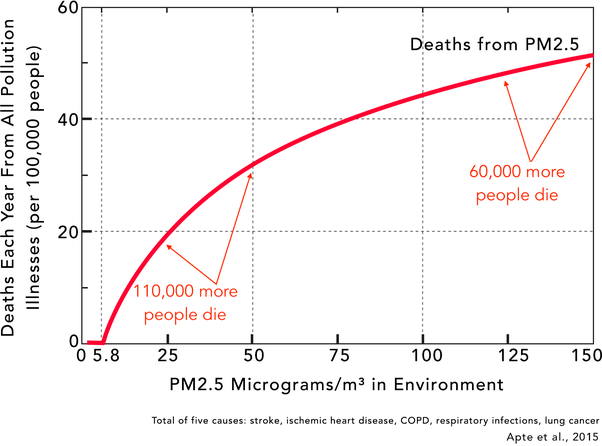 And here’s why that stats quirk actually matters for real life. Oddly enough, it’s that first 15 or 20 micrograms that damage us the most. That’s why people in cities with lower pollution level should be worried.

Click here to read the original answer on Quora: https://www.quora.com/Would-reducing-air-pollution-save-thousands-of-lives

Smart Air is a social enterprise based in China, India, Mongolia and the Philippines that creates simple, no-nonsense air purifiers and provides free education to combat the impacts of air pollution. More about who the heck we are.
© Copyright 2021 Smart Air. All content made available under Creative Commons BY-NC-SA-4.0